Tales From The Banks Of The Mighty Mutagenic, Part 5 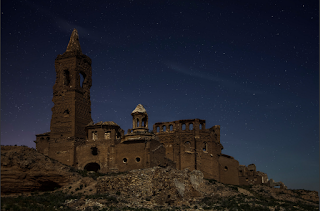 Well, our vampire heroes narrowly survived their brush with Mutantville's resident kaiju last week, so what now? For starters, Tommy's still stuck as a mortal, but feeling better, but Katheryne's speeder-gum-influenced power burst from last week is starting to wane...and the gang's got a whole horde of angry mutants chasing them, with torches and pitchforks, no less!

I know they're our protagonists, but it's hard to blame the residents of Mutantville, eh?

But Katheryne's got enough power left that she could wipe out the angry mob with a magick force blast, though the question is whether or not she's up for it. And even if she did, there are plenty more mutants where this mob came from!

Maybe it's time to bug out and hide somewhere while the Caddy finishes recharging? But where? That creepy old town Katheryne and Donita spied from atop the necronaut? Hell no!

But any port in a storm, as they say...even if the port has a hellish hidden history. Oh boy.

Read on via the link below, and rest assured--this tale is far from over!


Tales From The Banks Of The Mighty Mutagenic, Part 5

Photo Credit: The Ruins of Belchite by Martin Zalba
Posted by Matt R. Jones at 8:48 AM