Tales From The Banks Of The Mighty Mutagenic, Part 6 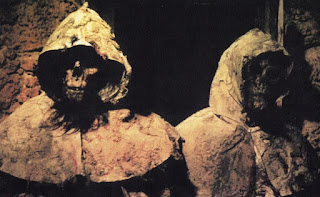 Last week found our (mostly) intrepid vampires fleeing a horde of angry mutants and ending up in a sinister old monastery, and barely after they had a chance to catch their breath, they were besieged eerie chantings and thunderous bell-ringings. And investigation to the monastery's bell tower only led to a collapsing floor and plunge into the stygian depths beneath the creepy, abandoned town, and...

Answers to some of the questions that've plagued our heroes from the beginning of their long strange trip, and trouble...a hell of a lot of trouble. More trouble than they might be able to handle in their weakened state, even.

I'm beyond hyped for this week's installment, because I've finally been able to include some of my favorite movie villains into a story! I don't want to go into too much detail, for the sake of spoilers, but I'll discuss them a little more at length next week. I wrote this novel purely for the fun of it, with the intent of just seeing where it went and I took the opportunity to do some things I've always wanted to, but hadn't found the right story to do it in.


In the meantime, I've included one of my favorite tracks from British doom-metal masters Cathedral to help set the mood. Like myself, Cathedral are huge fans of this week's "guest stars," and wrote no less than four songs about them over the course of their career. Even if metal's not your thing, having this on in the background will nicely help set the mood for this week's installment. Cathedral beautifully manages to capture the slow, haunting atmosphere that made the old movies so effective, and it's a song I never, ever tire of.

Enjoy...and don't let anything creep up behind you, eh?

Tales From The Banks Of The Mighty Mutagenic, Part 6