Tales From The Banks Of The Mighty Mutagenic, Part 7 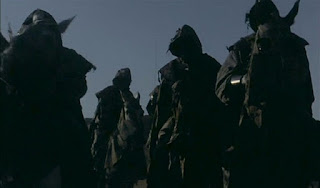 So how about those Knights Templar Ex Mortis? What a bunch of creepy assholes!

Hope you enjoyed their appearance as much as I had writing it; I've been wanting to add them to a story for years now. They come from the Spanish Blind Dead film series, created and directed by the late, great Amando Ossorio, and while they're not what you'd call masterpieces of film-making, their atmosphere is second to none, and are well worth your time if you're a horror fanatic. I've always found them fascinating and menacing, as well as criminally-overlooked, and their inclusion in Mighty Mutagenic is my homage to these largely-forgotten gems of horror.

The Knights' appearance in Mighty Mutagenic stays largely true to their film portrayal, minus the reality-hopping and that kind of thing, so if you're a horror fiend and liked them here, I highly recommend you seek out the films! Each movie is self-contained and doesn't follow from the previous one, either, and the final one, Night Of The Seagulls, is the best-made out of all of them, so that'd be the one for a newbie to start with. I've included the long-ass trailer for it below...even if you don't watch the movie itself, the trailer gives you a good taste of the blind dead!

In the meantime, our weary vampire heroes have managed to escape from the catacombs of the blind dead, only to find that the bloodthirsty Knights Templar Ex Mortis aren't done yet. Seriously, what does it take to get home?! And after this installment, will everybody even make it home? Will anybody? The silent menace of the blind dead continues in today's installment, as our novel begins to wind down, with the conclusion coming next week. The question is, will it be a happy conclusion?

Not if the Knights Templar Ex Mortis have anything to say about it. Read on!


Tales From The Banks Of The Mighty Mutagenic, Part 7

And if you're curious about the blind dead, check out the trailer for Night Of The Seagulls!